TORONTO, Nov. 03, 2022 (GLOBE NEWSWIRE) — Emerita Resources Corp. (TSX – V: EMO; OTCQB: EMOTF; FSE: LLJA) (the “Company” or “Emerita”) is pleased to announce additional assay results from the 2022 delineation drilling at the La Romanera Deposit at its wholly owned Iberian Belt West project (“IBW” or the “Project”). IBW hosts three previously identified massive sulphide deposits: La Infanta, La Romanera and El Cura. All deposits are open for expansion along strike and at depth. Presently, there are 13 rigs on La Romanera deposit delineation and 1 rig continues to drill at La Infanta. Six drilling companies are engaged in the program. The most recent drill rig is capable of drilling shallower angle drill holes and will accelerate drilling of some of the thicker, higher base metal grade sections of the deposit, based on the historical intercepts. This area of the deposit was not systematically assayed for gold by previous operators. According to Joaquin Merino, P.Geo., President of Emerita, “The upper central area of the deposit is expected to contain a significant proportion of the historical resource, based on the base metal grades and thickness of the sulphide intervals in the historical drill holes. We are interested to see what the gold values are in this section of the deposit. In addition, we expect to commence drilling the El Cura deposit with two drills after December 1, 2022 which is after the hunting season in the area. El Cura is situated between La Romanera and La Infanta deposits.”

Additional assay results for the following six drillholes are reported as follows: Holes LR025, LR026 and LR033 are located at the western side of the deposit at various elevations. Holes LR032 and LR006B are in the central part of the deposit and hole LR030 on the eastern side (Figures 1, 2, 3). Table 1 below provides details of the intercepts and drill hole locations.

As with many of the Volcanic Massive Sulphide deposits in the Iberian Pyrite Belt, metallic zonation is a common occurrence. This appears to be the case at the La Romanera deposit, based on Emerita’s drill results to date. There are zones rich in gold, sometimes with elevated copper, and other areas rich in base metals, mainly zinc and lead. Elevated gold and silver values occur within portions of both the Upper and Lower Lenses and in all areas of the deposit drilled to date, which is a significant new development. Drilling is commencing that will test a large area of the shallower and central portion of the Lower Lens (Figure 3) which accounts for a significant proportion of the historical resource. Numerous thick intercepts are reported in the historical data for this area and the precious metal content was not systematically evaluated. 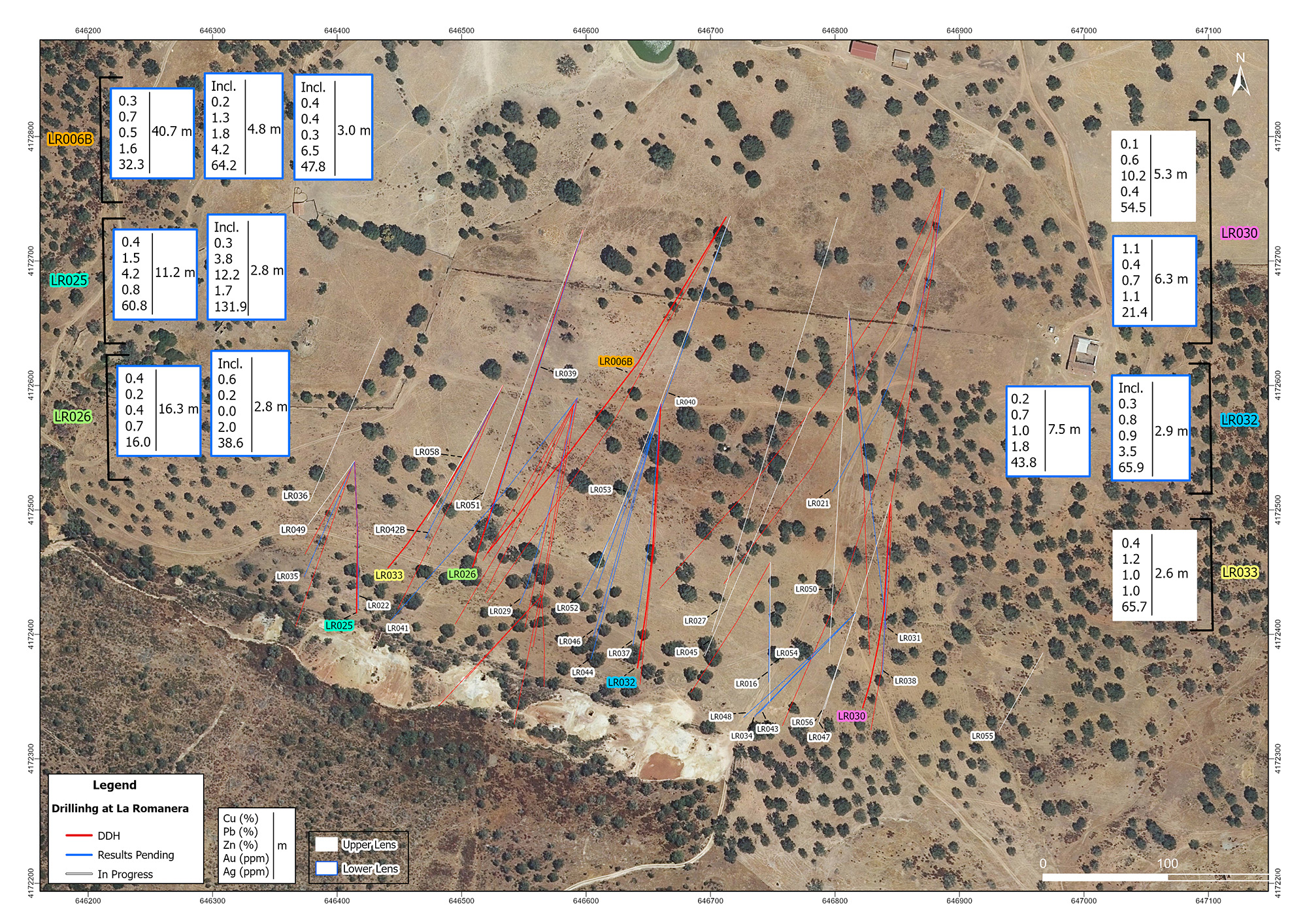 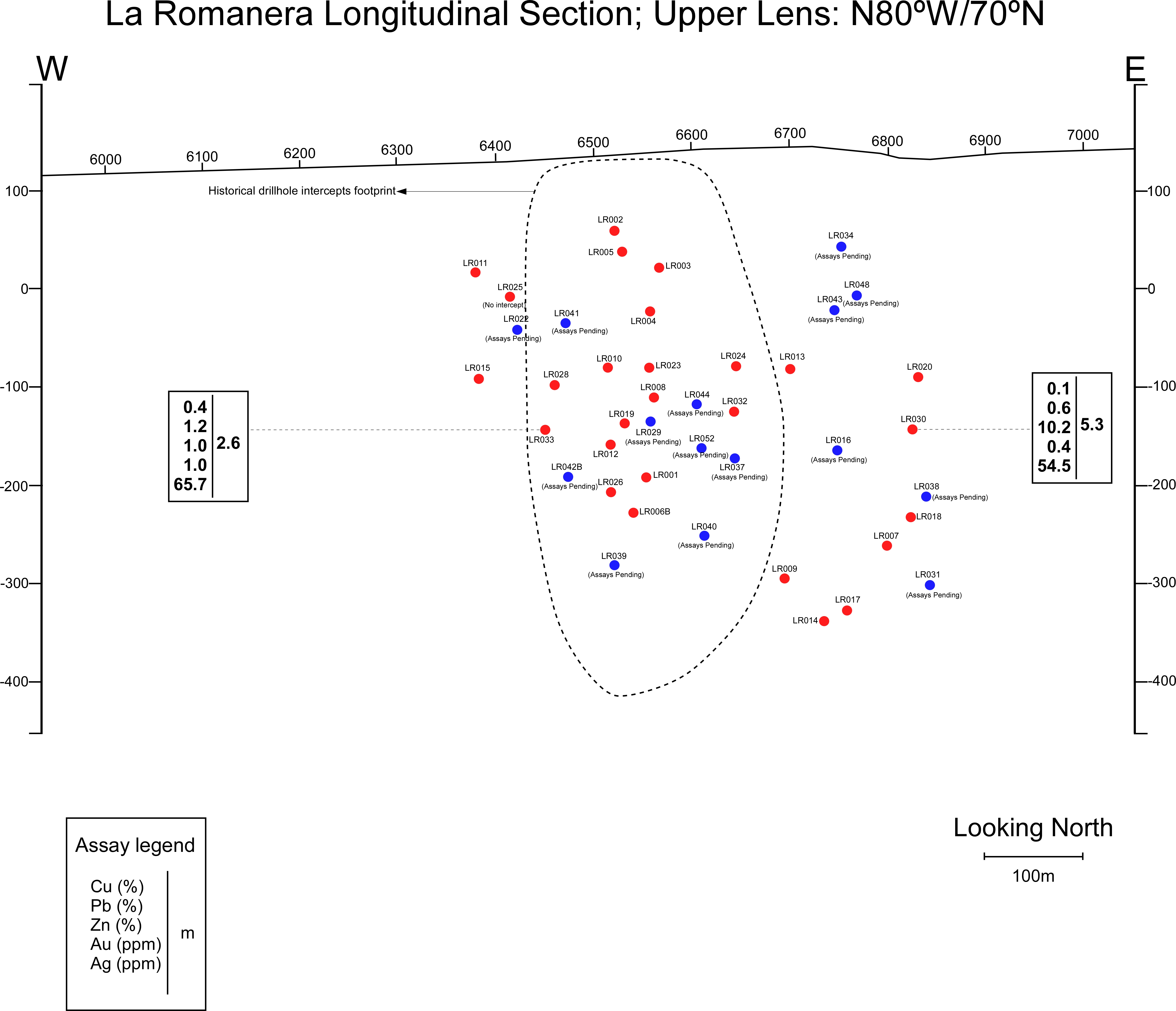 Figure 3: Longitudinal section showing intercepts in the Lower Lens, La Romanera Deposit. Note the area in the red oval that hosts significant portions of the historical resource referred to in the text above. 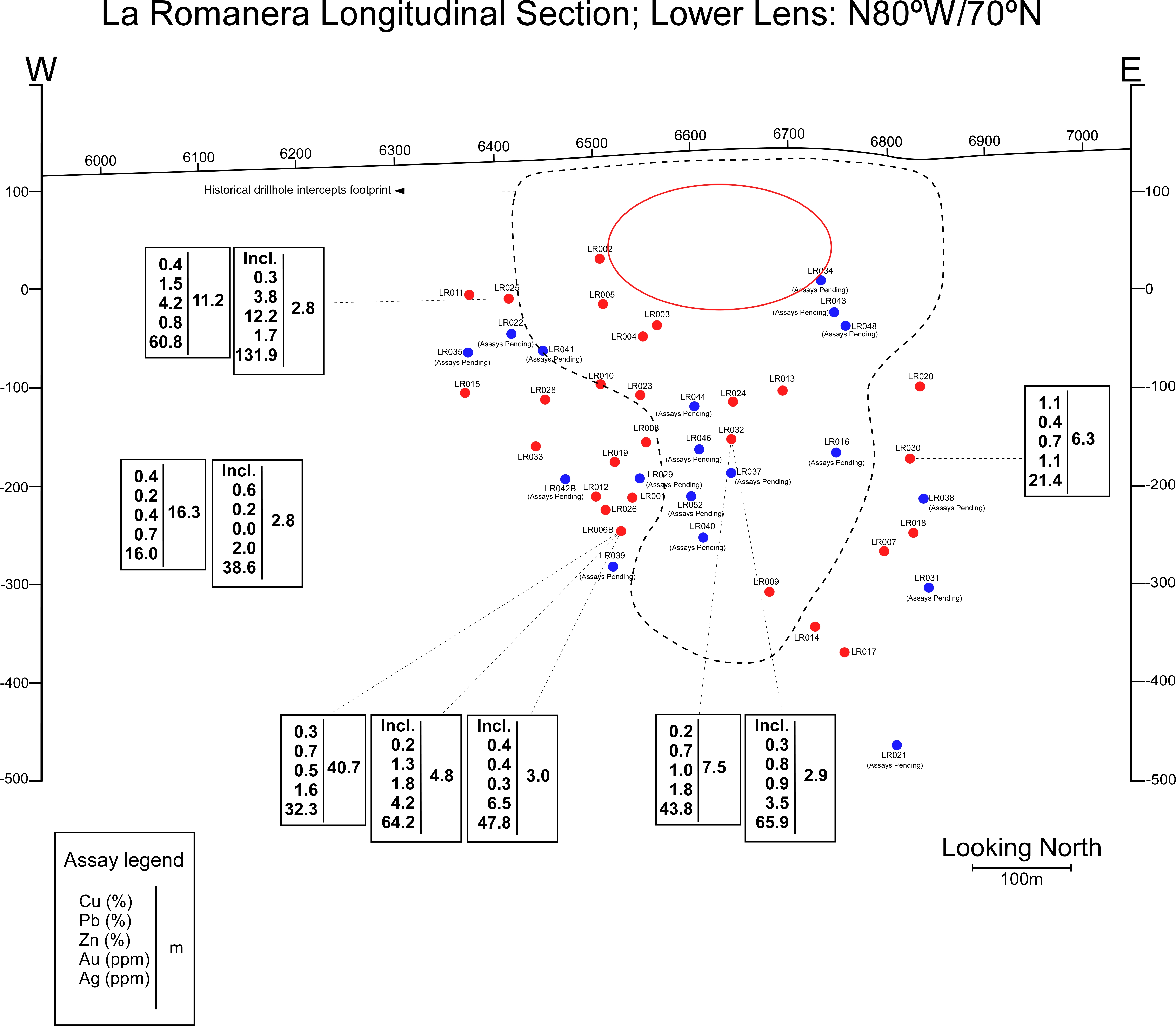 Drilling at La Romanera is HQ size and core is placed into core trays at the drill site and transported directly from the site to Emerita’s coreshack (15Km) from Romanera and (8Km) from Infanta. Once the cores are received at Emerita’s coreshack they are photographed and geotechnical logging is performed. Geological, mineralogical and structural logging follows and mineralized zones are identified. The samples are marked every 1m or less, and respecting lithological contacts, with most of the samples 1.0m long. The zone immediately above and below the mineralized zones are also sampled. Core samples are sawed in half and half of the core is returned to the core tray for future reference. Once the core samples are cut, bagged and tagged, they are shipped to the ALS laboratory in Seville by Emerita personnel where sample preparation is done. In Seville, ALS performs the mechanical preparation of the samples and then the pulps are sent to ALS Ireland (ICP) and ALS Romania (fire assay). The analysis at ALS Lab corresponds to the ME-ICPore (19 elements) package, together with the Au-AA23 fire assay (Gold).

10% of the analyzed samples correspond to control samples (fine blanks, coarse blanks, high, medium and low grade standards). In addition, 10% of pulps are reanalyzed at a second independent certified laboratory (AGQ Lab Sevilla). When the analysis is completed, the certificates are received from the laboratory and the QA/QC protocol identifies any deviation or anomaly in the results and the entire batch is reassayed in such case. Once the data is approved by the QA/QC protocol assays are entered digitally directly into the database.

The scientific and technical information in this news release has been reviewed and approved by Mr. Joaquin Merino, P.Geo, President of the Company and a Qualified Person as defined by NI 43-101 of the Canadian Securities Administrators.

Emerita is a natural resource company engaged in the acquisition, exploration and development of mineral properties in Europe, with a primary focus on exploring in Spain. The Company’s corporate office and technical team are based in Sevilla, Spain with an administrative office in Toronto, Canada.