TORONTO, Sept. 30, 2022 (GLOBE NEWSWIRE) — Emerita Resources Corp. (TSX-V: EMO; OTCQB: EMOTF; FSE: LLJA) (the “Company” or “Emerita”) is pleased to announce additional assay results from the 2022 delineation drilling at the La Romanera Deposit at its wholly owned Iberian Belt West project (“IBW” or the “Project”). IBW hosts three previously identified massive sulphide deposits: La Infanta, La Romanera and El Cura. All deposits are open for expansion along strike and at depth. The Company also announces that it continues to accelerate drilling at IBW where it has increased the number of drill rigs from 10 to 13. Presently, there are 12 drills on La Romanera deposit delineation and 1 rig continues to drill at La Infanta. Six drilling companies are engaged in the program.

Assay results have been received from 2 drill holes (LR019 and LR023) at the La Romanera deposit reported below.

According to Joaquin Merino, P.Geo., President of Emerita, “We continue to extend the mineralized envelope at La Romanera. The historical drilling was done over a number of campaigns by more than one operator and the approach appears to have been inconsistent between campaigns and as the understanding of the geology evolved over time. In certain holes massive sulphides were identified but not assayed. Emerita is seeing high gold values in areas of the Upper Lens, for example, that were not sampled in the historic holes because visually they had lower base metal content. In other areas of the deposit, Emerita is intersecting two Lenses where the historical data base only has data indicating a single lens. We continue to accelerate the drill program and look forward to delivering a NI 43-101 compliant mineral resource estimate.”

To date, 33 drill holes have been completed on the La Romanera deposit which is the main focus of the IBW program. Presently, there are 12 additional drill holes in the lab and 12 additional drill holes in progress at La Romanera. The Company keeps one rig in La Infanta doing infill drilling. Temperatures are dropping rapidly, which will facilitate improved drilling efficiency by eliminating fire hazard restrictions. The Company has also incorporated a third coreshack in the same industrial area to store core boxes. 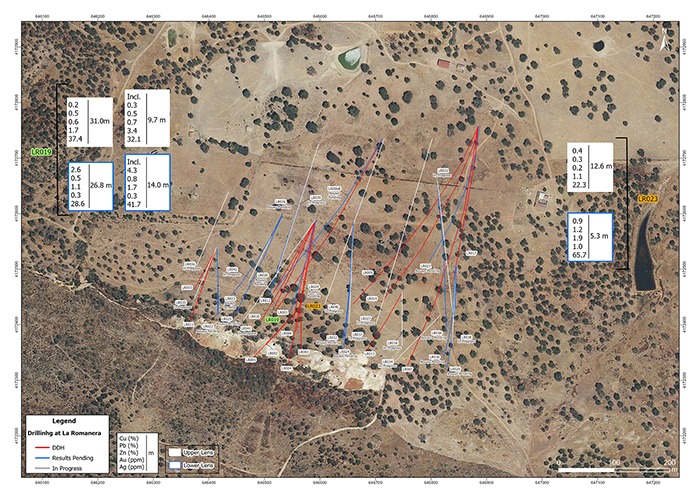 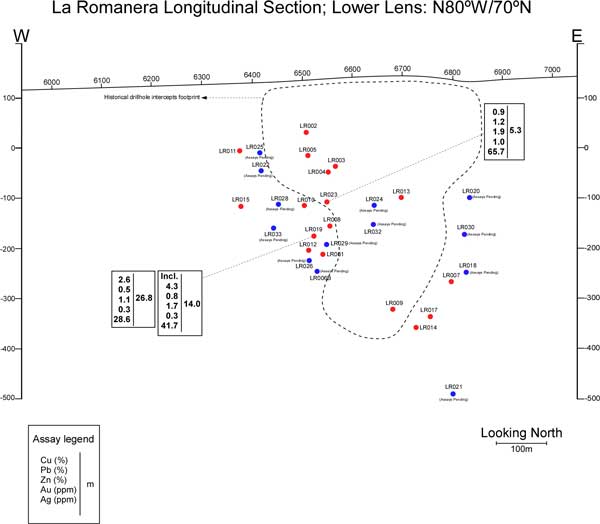 Figure 3: Vertical Longitudinal section of the Lower Lens at La Romanera Deposit. The dotted outline shows the approximate area included within the historical 34 million tonnes mineral resource estimate. Drill intercepts shown are from Emerita’s drill campaign and not the historical drill holes. Historical drill holes that intersected the Upper Lens in the area of LR019 were stopped before intersecting the Lower Lens.

The scientific and technical information in this news release has been reviewed and approved by Mr. Joaquin Merino, P.Geo, President of the Company and a Qualified Person as defined by NI 43-101 of the Canadian Securities Administrators.

Emerita is a natural resource company engaged in the acquisition, exploration and development of mineral properties in Europe, with a primary focus on exploring in Spain. The Company’s corporate office and technical team are based in Sevilla, Spain with an administrative office in Toronto, Canada.